Two days after our arrival to Casablanca we went to the north. Our Moroccan hosts were quite curious why we decided to go to Nador, so far it`s not a touristic city at all and there is nothing to do there… but I have someone special from Nador who was already waiting for our arrival.

Nador is the small city on the North part of Morocco which is washed by the Mediterranean Sea.  It is quite conservative Moroccan city, where you can`t appear on the streets like in Europe, so here we tried our newly created “Moroccan style”.

I have to mention that we came to Morocco during Ramadan and we had a huge experience how Moroccan families live during the month of fasting. Our hospitable Nador family was trying to arrange everything to make us feel as at home. We had breakfasts, lunches and Iftars (the meal of Muslim people when they can start eating during the Ramadan) while the family had only Iftars. We were trying to be familiar with the local traditions but it was not that easy. At least we were needed to drink water, because it was the hottest season.

We lived in a big 4-storied house on the 3rd floor in a separate room. The house is decorated with traditional Moroccan patterns and ornaments which I like so much.

My favorite place in the house was the terrace on the roof. I couldn’t sleep too much during my stay in Nador, because I was so over excited so I spent a lot of time on that terrace. I met sunsets and sunrises and when I had insomnia at night I was counting stars on the roof.

There is no many places of interest in Nador but there is a seaside which is better than everything else we could see in a big city. It was my first time swimming in the Mediterranean Sea and I liked at that much. While walking alongside the water we discovered a “”Paradise Island” but I didn’t have my camera with me this time, but I still keep in memory this picture.

Once we have visited a contest for best Koran readers. It was interesting to explore, I couldn`t expect that there is such type of contests in Muslim world.

Here in Nador we witnessed the end of Ramadan –  Eid Al-Fitr. I was expecting a big family party or something like this, but it was quite calm. By the way, here in Morocco we had the longest Ramadan, than other Muslim countries, because the sky was cloudy the day before and we couldn’t see the moon last night. In Islam the Ramadan month ends when the croissant moon appears on the sky. 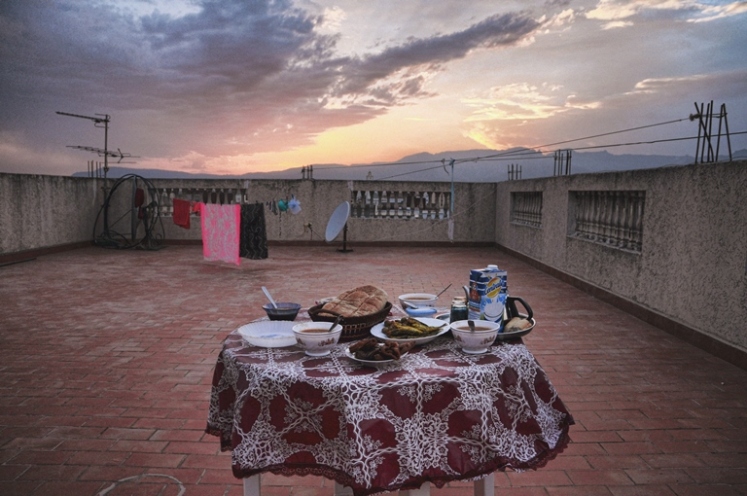 The next morning people went to mosque and after the praying – to visit their families. Everyone was wearing clothes for special occasions such as this day. It reminds me about our Christian holiday – Easter, which is also the big holiday, when people are allowed to break the fast. Everyone is happy and ready to meet the family.

I had unforgettable experience in Nador. We`ve lived in a wonderful family and explored the Moroccan culture and traditions from the inside. More about our experience in Morocco during Ramadan read here.